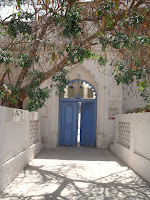 It’s a rainy morning here in Edinburgh, and most of Europe is currently stuck in the midst of Volcano-related travel disruptions. Nothing coming in, nothing going out. Unless you count the actual Volcano itself, which seems to be spewing unabatedly. I got back from Bahrain two Sunday mornings ago, and in honesty would have been absolutely delighted to have found out I was stuck on holiday for an extra week. Blame the volcano. I’m off to sun myself by the pool.
The Bahrain trip was in honour of middle sister Sarah’s 30th Birthday, so little sis Mim flew out from Vancouver, I arrived from Edinburgh and we all met up in this tiny little island Kingdom , situated in the  Persian Gulf . After a couple of months of co-ordination, Mim and I landed within a couple of hours of each other, and our sister adventure was to begin.
Now, during recent years, geographically-speaking at least, the girls and I can hardly be farther apart most of the time. With this distance come the new jobs, friends, lovers, apartments that you only ever hear about. Until the next holiday or trip home is planned. So whilst we have our own lives to enjoy, there’s always one thing that will unite us with an excited story, even an emailed photo, and from me more than likely a blog post.It’s food. We’ve been a foodie kinda family from day one. To my shame, I used to get busted trying to swap mum’s lentil soup and sour-dough bread sandwiches for hot dogs and ice cream sandwiches when I was a nipper at school in Canada. Sarah’s been known to recreate famous impressionist paintings with the ingredients on her plate, and Mim’s followed the most blatant ‘route-culinaire’, as she’s been working in the restaurant world of Vancouver for almost 10 years. 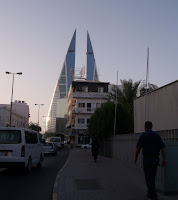 Bahrain’s a diverse little island (for more info, check out the Wiki link here) . A place of freshwater springs, ancient civilisations, pearls, and oil discovered oil in the 1930s which is now is rapidly running out. It’s an interesting mix of old and shiny new world. Camels and ancient gardens, horses, a guy riding a donkey-pulled trap on the highway. Blending in with this is an unashamedly modern and capitalist aspiration, with sky-high buildings, pampered ex-pats, land reclamation and those 21st century shopping malls. 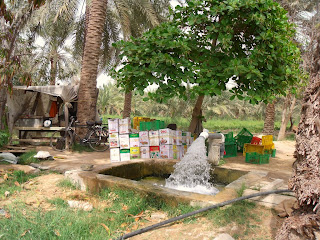 What cannot be doubted is that it has an amazing  variety of restaurants. As a multicultural place, one of the greatest benefits has to be access to the world’s larder, and its accompanying vices and foibles. So on one hand you’ve got the little local guy baking bread , and serving it to the waiting people on the street in the neighbourhood of Ras Ruman. Two minutes down the road five chains of American burger joints line up, competing to cater for the  home-sick allegiances of the US Navy boys, and increasingly the locals too.

We ate some cracking meals, and here’s just a few little tips which can definitely be used as a ‘hit-list’ if you ever happen to find yourself out there! OK, and I was also seduced by Krispy Kreme. There, I’ve said it. Their web world is a bit behind, and few places have their own website, so where possible, I’ve hyper-linked to another website, which should have the relevant contact details. 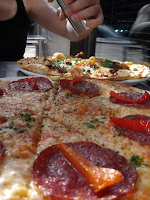 This was my first proper meal in Bahrain, and didn’t really know what to expect. Especially when you’ve parked up at a strip-mall, beside an actual mall; facing a row of shiny new restaurants. Little did I know I was about to get a taste for the fantastic food on offer here. Now, regular readers will know of my LOVE of a good pizza, and I’m delighted to report that this one was ‘just as good as La Favorita’. I know. Big claim! They would have also taken the loyalty edge due to the amazingness of their chicken, avocado and pomegranate salad, however the stakes were re-drawn when I remembered I was in a Muslim country, and couldn’t get a glass of white wine with lunch! Never mind. The gorgeous virgin cocktail totally made up for it, lovely juice!
Across the road is Café Lilou, a slightly surreal experience that’s almost Disney-like in it’s near-accuracy of French coffee house. Black and white clad army of waiters, fridge full of patisserie, and Parisien-style relaxed lack of purpose from the clientele. In honesty, the cakes didn’t fare  quite as well on the palate as they did on the eye, however it was a valiant effort!
Eating out in Bahrain actually invokes a lot of ‘where am I again?’ kind of musings. We had a teriffic lunch in Cafe La Ventana, which is found in a wee house in the Adliya area. A very bohemian feeling place, lots of wacky art work on the walls, and a great menu comprising the longest list of ingredients you can probably think of, and then arranged into whatever salad, sandwich combo you fancy that day. I ordered the ginger chicken salad that had, let’s say a conservative estimate would be at least 20 different ingredients. It took a full 25 minutes to munch through the whole thing, and by the end I was high on vitamins and colourful stuff. All for around 4 Bahraini Dinars, which I think is about £6.50.I  also had a lemon and mint juice which is hugely popular in the Middle East, and was the first of many during the trip. We finished off with a squishy  vanilla-y cake that was so tasty,  we were all fighting over the last crumbs.
We went twice to a little Thai place called Siam Soup, which again was on the ground floor of a house. Mim’s our resident Thailand expert, so to wow her enough to want to come somewhere twice in the same holiday is good going. She raved about the prawn cakes, I went nuts for the beef sate, I also nearly blew my throat off by adding too much red sauce to my chicken broth, and spent the rest of the evening also blowing my nose. Sarah loves pretty much everything as she’s a regular. Ooh, and they serve beers, so a couple of Singhas were called for.
Al Abraaj
We ate at a couple of little local grills, the kind of spot that doesn’t get a listing in the restaurant directories, just reliable easy food. The felafel (or sock sandwiches as Sarah refers to them) were great,   ridiculously green tangy tabouleh, creamy tahine, and fresh juices made with seemingly unlimited combinations of fruits.
For a more commercial version of this, head to Al Abraaj, which is a local chain of Middle Eastern restaurants. The menu covers a huge array of Lebanese-style favourites, kebabs , shwarma, koftas and the like, not to mention some rather incongruous items on the menu such as stroganoff and Chinese sweet and sour. Nevertheless, it was a decent meal, and I can understand why the place is doing well. Again though, amazing how cheap your dinner bills are when there’s no booze charges!


The Radisson Diplomat – Friday Brunch and Trader Vic’s
So was it all fresh juices on this holiday? Heck no! We were there for a 30th Birthday, after all! Now, Friday brunch is a notorious weekly event in the Middle East. The weekend is a Friday and Saturday in that neck of the woods, and so whilst the locals have their prayer day on Fridays, ex-pats like nothing better than meeting up with every single person they know, and having a serious party. It’s a riot, and despite the KILLER hangover I experienced after my fun day (yes DAY – we started drinking at midday, and lasted through to 9pm dancing) , it was one of the things that would definitely tempt me to move to this part of the world. A great social do, and nice to look forward to every week. You pay around £30 a head, and it’s a case of all you can drink of sparkling wine, and all you can eat from the buffet. Most people seem to forget about the food part once the band get started, but Mim and I were well into the novelty of it, and tucked into the lavish buffet spread. Lots of sushi, cold meats and salads, and a decent selection of cook to order dishes like prawns, pasta station and so on. We chanced upon a chafing dish full of Frenched lamb chops with a really good marinade, and whacked around 20 on a plate for scoffing. That’s 20 each. Sorry, they were delicious! After my personal allocation of three bottles of fizzy wine, two pints of orange juice and as much mineral water as my gullet would allow, the rest of the day involved hours and hours of dancing to the resident house band. Oh, and a cola at around 7pm. 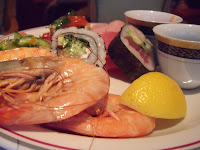 Our night at Trader Vic’s, on the other hand, was a much more civilised (to wit, much less bonkers) affair . The restaurant/bar/tiki lounge complex is situated in the grounds of the extremely plush Ritz Carlton Hotel, which has its own wee section of beach. We arrived around 9pm, and I can’t really describe how cool the atmosphere was in this place. I keep thinking how great it would be to have one here, but in reality, sitting outside by candlelight really only works if you’ve got a guaranteed temperature of at least 20 Celsius. Fortunately Bahrain is one of those places where it’s pretty much always warm, so this place was packed on a Wednesday night. Trader Vic’s seem to have legend-status for their cocktails, and after sampling a few, I now know why. Each is served in its own different glass to ‘suit the drink’, I can honestly say I’ve never had such tasty cocktails. The Singapore Symphony  was out of this world – slurpingly good, and  served in a huge vat, so lots to enjoy and share too.  And garnished with a beautiful orchid flower. For eats, I had a great seared tuna sandwich with wasabi mayo, and served on Poilâne Bread (hey, you don’t have to go to Paris!) which was lovely. Nothing complicated, just a simple bite to  eat that hit the spot nicely. Can’t beat that gorgeous smoky taste of rare gilled tuna! I sort of think my version of heaven looks a lot like Trader Vic’s. Complete with Cuban band playing in the background.
So this post is in honour of my amazing sister Sarah, marine-biologist extraordinaire, lover of great nosh, she who complained that I never properly name check her in Leil’Appetit! Happy 30th Birthday Sarah! You’re a doll and I loves ya!