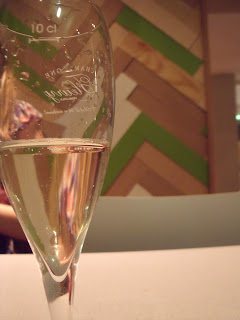 Spring has been letting itself be known these past few weeks; have you seen the fabulous riot of colours the crocuses bring to Leith Links at this time of year? So, to whet the appetite of  (and thirst for) summer-to-come, long nights, and the banishment of anything less than 60 denier tights, the girls and I had a wee ‘end of winter’ celebration dinner on Friday night. Oh yes, the legs were out and everything. Retro 1950s anti-glare glasses optional.
Commencing with a G&T at Amicus Apple to start, Louise and I ambled (or, more accurately, tottered ) along past Rose Street’s bars to check out one of the city’s newer openings; Pickledgreen. Entering from ground level, it has the look of a café, with a drinks fridge, and a couple of big communal tables. So, a deli-slash-café by day, and bistro come night time. We arrived just as the sun was starting to set, and Pickledgreen’s Batman-style transformation was near complete. The ground floor room was empty, but for the charming host, who welcomed us in and offered the wine list whilst we waited for the final member of our trio. We had a fleeting ‘should we/shouldn’t we’ debate on the Champagne, and ended up making a great choice with a classy £19 organic Cava instead. Turns out that all of the wines are organics, or even biodynamics, and the list offers a compact but varied tour around Europe, South America, Aussie and NZ, varying between the £13-odd to £30-odd price mark.
Lady number 3 arrived soon after, and we were shown upstairs to the main dining room. First thoughts are this is a nice light space, perhaps a little too light for evening ambience, with lots of un-treated wood surfaces, and a cool ‘shades of green’ feature wall. Actually, it was commented that the room does have the faint whiff reminiscent of your high school’s wood workshop. Not necessarily a bad thing. I remember making a spatula with particular pride.
The menu works on a very purse-cheery basis of set price for 2 or 3 courses, at £15 and £18 respectively. This is undoubtedly a bargain, particularly given that the restaurant follows through with green credentials hinted at in its name, engaging with suppliers to provide local and organic produce and ingredients wherever possible, and  they work hard to minimise the restaurant’s carbon footprint.
On to the menu, and I swithered on whether to go for the pork belly and black pudding fritters, and think maybe I hit a slightly duff batch of wild mushroom risotto with watercress salad, which I chose instead. The rice was cooked perfectly, the mushrooms had also held a nice bite, however there was a distinct lack of that expected gooey deep flavour within the rice itself, almost as if they’d skimped on the stock. A liberal sprinkle of salt and pepper cheered things up, but even the watercress was naked, so the whole thing just felt really limp. On the other side, the girls both had the soup of the day which looked fresh and hearty. I was conscious of sporting that  slightly jealous look, as the two of them wolfed into their soup and accompanying wodge of bread, whilst I slowly eked out the small portion of risotto.
I’m glad to say that my main course cheered me up to the point of visible grin. I was hungry and what arrived on a lunar-sized plate was delicious. Braised beef shin that submissively collapsed at the merest poke with my fork, freshly wilted spinach and a soft sweet-potato mash that worked so well against the über-rich flavours of the beef. Score! This was my kind of main course; my jealous glances banished. The ladies both opted for the very virtuous -looking and sounding sea bass, broccoli and new potato salad with flaked almonds. I’m sure I would have loved it, but my appetite was relieved that the beef had proven the mightier of the choices.
We each tried a different dessert, each of which was tasty if without any specific ‘wow’ factor. These being an apple strudel with honeycomb ice cream, a chocolate and orange cheesecake and a rhubarb compôte with natural yoghurt. Mine was der strudel, a home-made cigar shaped filo parcel, oozing with softly cooked spiced apples, and served warm to melt the sweet ice cream. Louise was doing the funny noises thing of someone getting seriously in to their chocolate. I think I’ve been watching too many episodes of Glamour Puds lately, so anything less than a Carême/Lanlard pièce montée is unlikely to get my heart racing, or my tastebuds hyperventilating anyway.
We couldn’t fault the service (just a tiny niggle, the jug of water which I’d asked for at the start of the meal didn’t actually turn up, but to be fair, I’d forgotten about it too) and by the time we left around 9pm, the place was just about full, with a cheery vibe. We had a great night and enjoyed some good food – a case of , well, what more do you want? The menu just had a slightly ‘limited’ feel, and this is something that will probably be ironed out as they gain the confidence of repeat business. I have to be honest and say that my man might have been left a tad peckish after three courses of some of the dishes, and it’s unusual not to have any extras shown to be available such as bread, olives or additional side dishes for sharing. The place is already gaining great word of mouth, though, so I’m sure that before long Pickledgreen will be in the pink.