I have a bit of an embarrassing confession, which is that the majority of Indian restaurant meals I’ve ever reviewed have left me in a post-meal coma. Mostly, it’s because I have a bit of a thing for the starters. Poppadums, pickles, pakora, those wee samosas…the full belly induced yawns are usually kicking in just as the main course arrives. 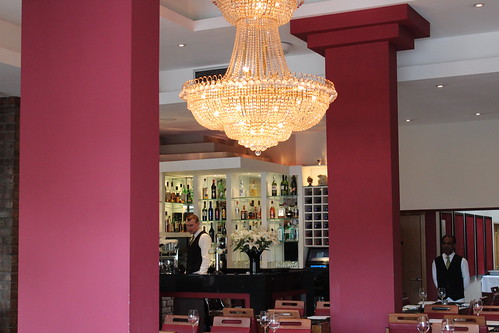 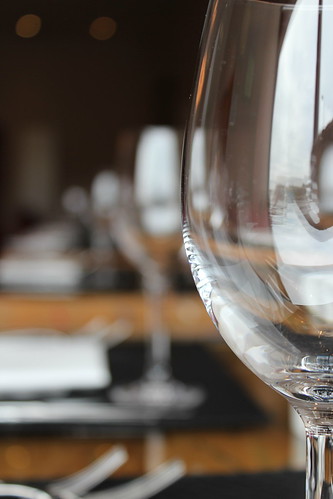 So, what if there was a way of enjoying all those flavours, the aromas, zingy spices without the deep-fried and very filling goodies? Step forward Mumbai Mansion. Deftly avoiding the use of the deep fryer in any of their food, this is a classy restaurant that’s doing an impressive job of challenging what we normally expect of an Indian restaurant.

The dining room itself is a decent size (a mirror running down one whole wall length makes it look more cavernous than it is) and the decor is comfortable with a bit of bling in the form of a feature light fitting. The inlaid tables with carved maps of India are a nice touch.

It’s a friendly place, that’s for sure. The front of house team (we were looked after by Assistant Manager, Arif) made sure that all tables were well attended to, helping newcomers negotiate the enticing but not standard-issue menu.

Much of Mumbai Mansion’s team, including head chef Pramod Nawani were previously at the short-lived but highly respected and award-winning Mithas, in Leith. That they’ve already garnered an AA Rosette at their new location on Morrison Street is impressive.

Wine & spices are a tricky pairing at times, however the Cinsault Rosé we ordered turned out to be a fantastic match for our chosen dishes.

To start, we chose the Mumbai-style marinated sea bass. I cannot quite express how much I loved this. It had a dry spice rub, a little coconut-y almost like that peshwari sweetness. The immaculate fillet itself was soft, flaky and irresistible. A plum sauce on the side was a pleasantly fruity foil, as was the kimsi salad (like a slaw) with yoghurt dressing. 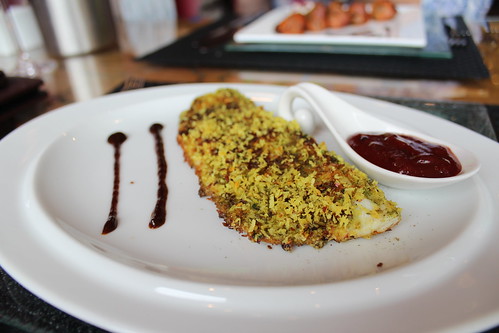 We also had the Venison Boti marinated in honey and pineapple. ‘Boti’ is a term for whole muscle meat from the leg or shank). The meat was flavoursome from the marinade but still with that trademark iron-y flavour. It was mostly tender save for a line of sinew which ran through the cut, and meant a bit of negotiation. But hey, we’re meat eaters, we can live with that! 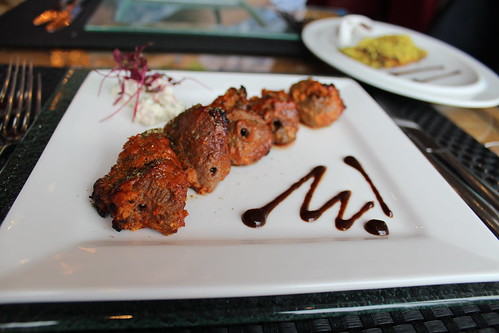 Here we were, main courses arriving and I hadn’t thought of taking a ‘between courses’ nap! We ordered two curries (i.e. dishes with sauces) which, although with similar hues were markedly different. The juicy, fat grilled prawns came in a ‘Malabar style toasted coconut and peanut sauce with a touch of coccum’. The sauce had a nice smokiness in its heat, but still very mild and in no way fighting with the sweet prawns. 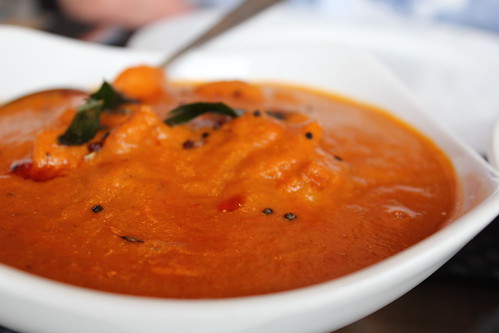 The breast of duck marinated and roasted served with coconut-based sauce was so good, I wish I’d taken a portion home. The duck (roasted on the bone for max flavour) meat was so softly-cooked, almost that ‘pulled’ texture. A sweet coconut-based sauce had a gentle chili kick. It’s worth mentioning that we managed to get through two portions of the squashy part-blackened naan bread and golden turmeric infused basmati rice. 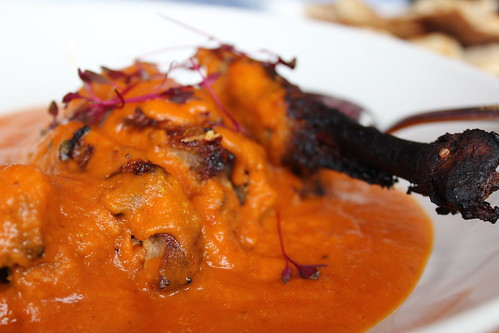 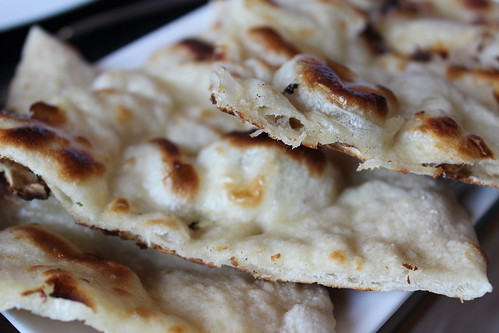 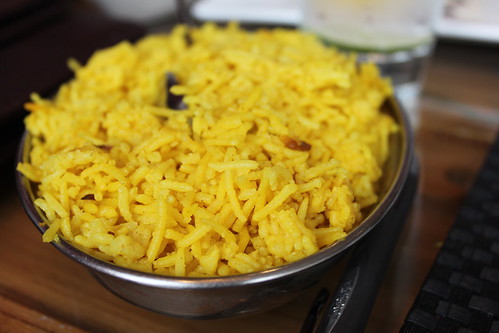 Anyone who reads this blog knows I’m a bit of a tyrant when it comes to critique-ing desserts. These guys needn’t fear, the two that we tried were a delight. A tasting plate of mango consisted of a silky panna cotta, a fresh mango fruit & minted smoothie, and an ‘oh-boy’ zingy sorbet. The only slightly flat note was the actual fresh mango used to garnish the plate, being a tad under-ripe. 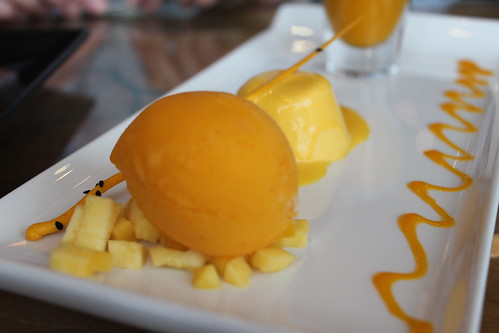 Equally good was the gingery-sticky pudding, served with an elegantly thin lime and fennel seed tuille., buttery crumble and vanilla ice cream. It was light, flavoursome, a treat but not overwhelming. What a hit! 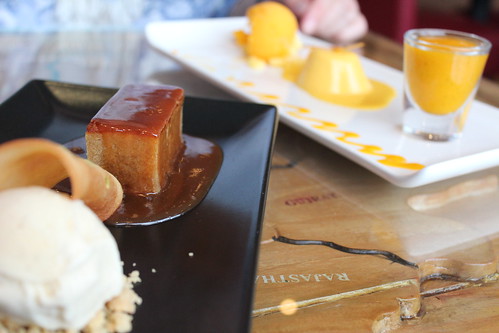 Mumbai Mansion is doing an impressive job of cooking up Indian food in a fresh light; it’s well worth a visit to enjoy flavourful modern dishes from the subcontinent, beautifully and thoughtfully presented.

Desserts £4.95- £5.95
House wine from £15.50
We dined as guests of Mumbai Mansion. Thank you so much to chef Pramod, Arif and the team for looking after us so well on the night. Thanks to Scott Thornton of Hotel PR for organising the review.