OK – so if you’ve been following the foodie stories of this blog for past gut-expanding, seven years or so, you’ll know that The Silver Fox and I don’t get out and about *kwite* as much as we used to. Felix the Fox cub, the adorable, nonsense-talking little guy is coming up for two and a weekend night off is something to look forward to.

Being Leithers (him a native, me adopted) it’s just as likely as not that we stay within the hallowed EH6  when seeking eats and drinks. Yesterday, having dispatched junior with  his grandparents (insert MASSIVELY GRATEFUL thankyou here) the fox & I headed across Leith Links in search of sustenance.

An attempt to have some lunch and brunch in our first stop had to be abandoned due to complete lack of service beyond drinks, so we meandered a little on towards VDeep. When they’d first opened last year (Feb 2015 ish) I was a little miffed as it took over the spot of the formerly-adored The Vintage. From the same team (via Williams Bros. brewers), VDeep is a modern take on the ‘curry & beer house’. Although instead of gallons of generic pisswater lager, they sell a great, rotational selection of draft keg, cask, bottle & canned beers from wide and far. Being saddo stuck in the flat parents, we often order their food via Deliveroo, as, frankly, once you’ve tasted this stuff, you will want it again. And again.

Having slurped a bottle of fizz at the previous venue, we arrived at VDeep with a mix of hunger and , frankly, desperation. Two pints of Drygate 4% Pilsner were quickly served (light, bright, delightfully sip-able) and after a whirlwind of ‘Tasmanian Devil’-esque menu scanning, food was on its way. 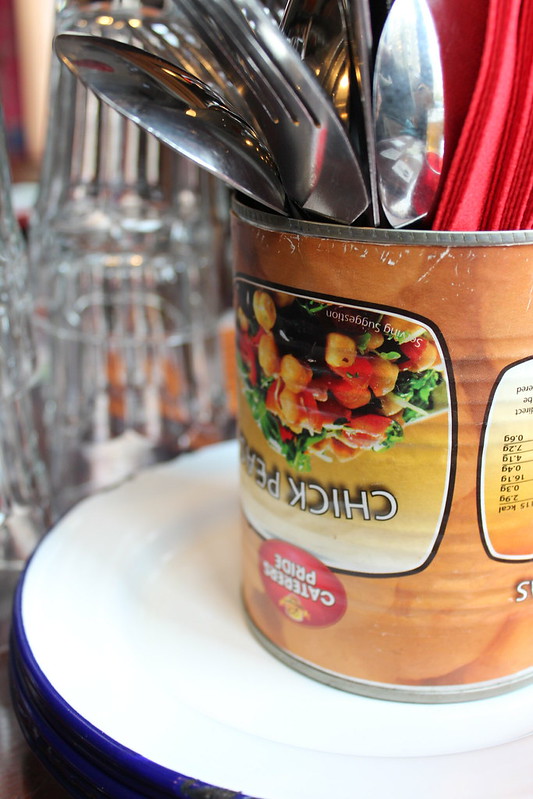 First up, two crispy disc-y  poppadoms and ‘pile ’em high’ slivers of onion chutney. Not sure what’s in this (I think there’s mint?) but it’s fresh, tangy and a little sweet and gone in 60 seconds. We shared an order of the mixed pakora. Crunchy balls of salmon, haggis and something veggie with a yoghurt dipping sauce. The desperation of hunger was abating and I was starting to enjoy this. 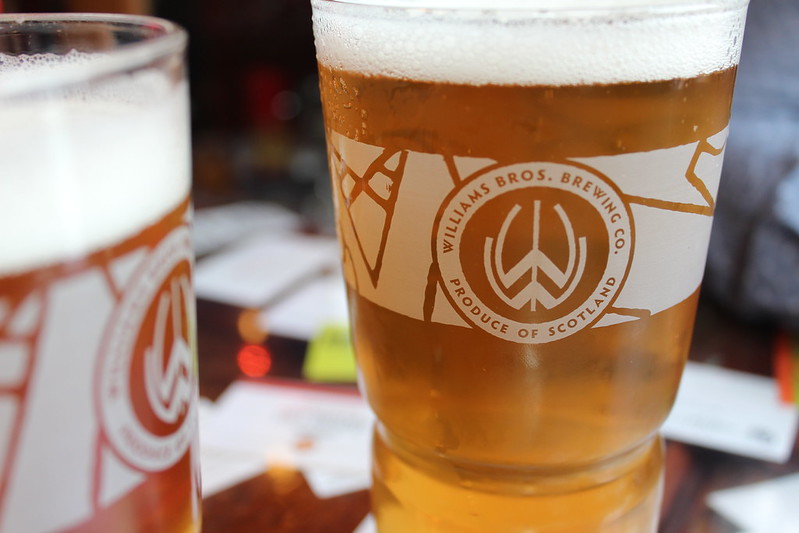 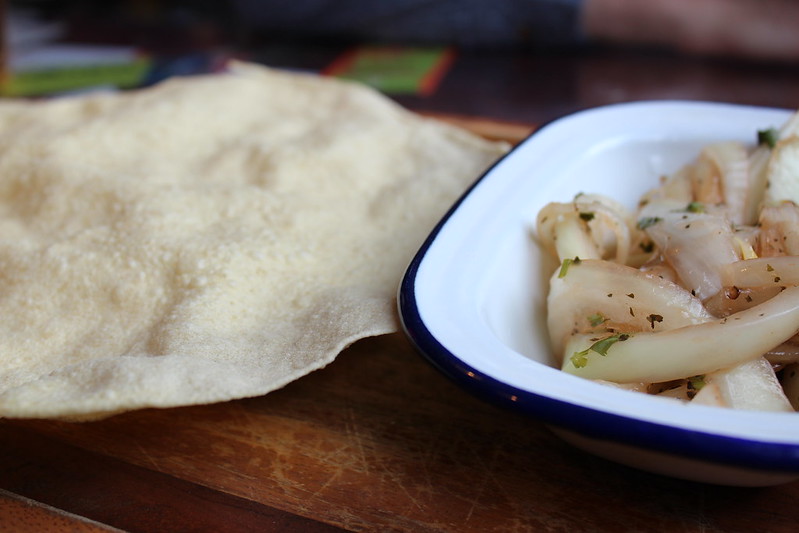 The mains arrived and, as has happened every time previously, a small swoon was emitted the moment the enormous peshwari naan bread arrived on the table. Studded with chopped raisins and dusted with dessicated coconut, it’s stretchy, puffy, sweet and delicious. We’d taken the tip for the day’s staff curry, today it was chicken with ‘can’t remember’ in a tomato sauce and boasting DEFCON1 levels of garlic. Punchy, aromatic stuff. 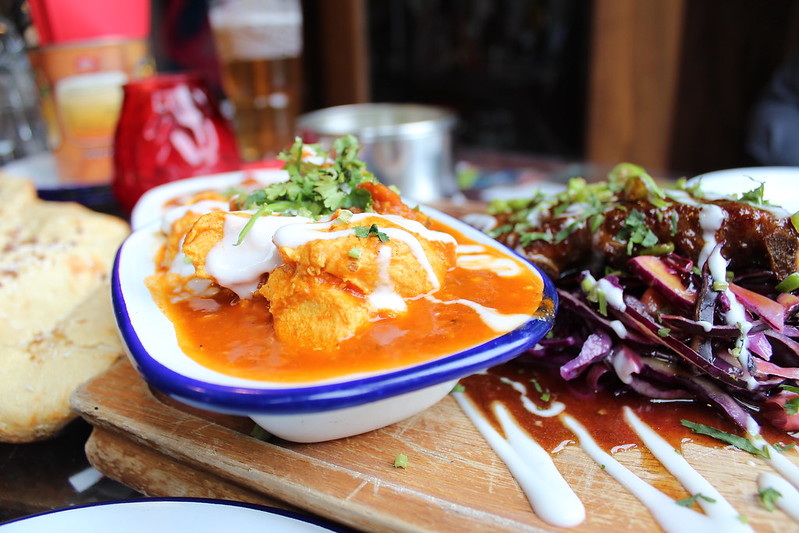 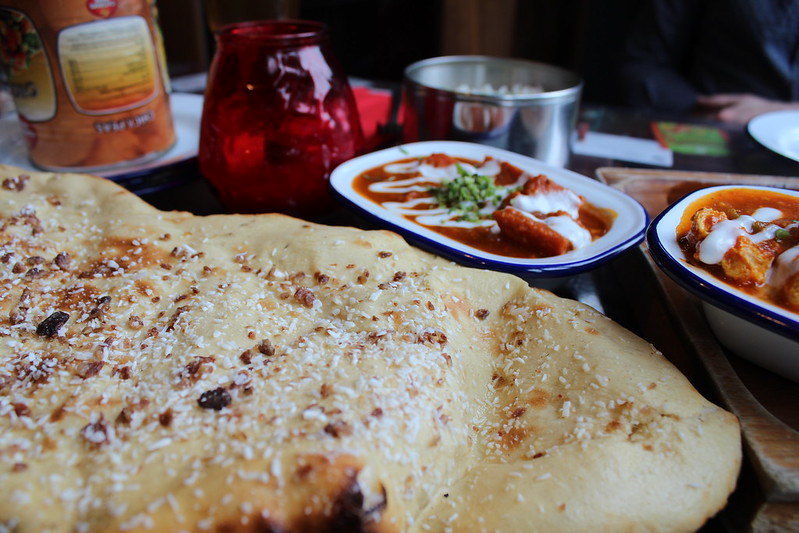 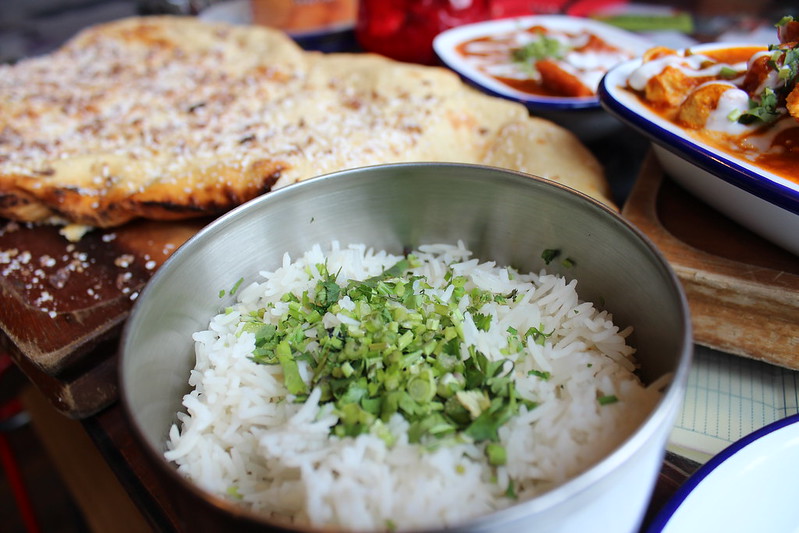 The BlackBall pork ribs are marinated and slow-cooked in the stout of the same name (from Williams Bros.) and come with a crunchy red cabbage slaw. This is always a favourite whether sitting in or ordering delivery. Sticky caramelised bits on the outside, tender on the inside, and yeh, fun to do the caveperson (man or woman) thing of chowing down off a rack of ribs. Oh and the sauce. It was destined to meet strips of that naan bread.

Another fave I had to order was the butter sweet potato curry, from the extensive list of veggie options. I ‘fess this time there were maybe more carrots than chunks of sweet potato (currently something I have a bit of an addiction to) but the balance of the sauce from sweet to chili to savour is dynamtie. Oh. And guess what? That naan bread once more…….

What’s not to like about VDeep? It’s friendly, the food is aces, the drinks are interesting and it’s totally affordable (all mains hover around the £7/£7.50mark). We’re lucky punks it’s just a 12 minute walk from our front door. The only way is EH-6!