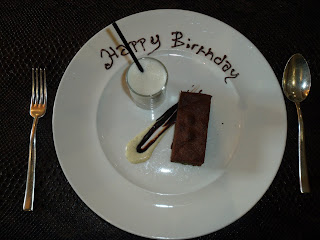 Yesterday involved a bit of a treat by way of a day off, and the day’s activities were punctuated by a celebratory lunch at Abstract in Edinburgh. This fine-dining restaurant rides a nice balance between chich modern French flair, and a comforting old school instinct of the seasonal and traditional.

It is fair to say that the interior might have been designed with evening ambiance in mind. The art on the walls is indeed abstract, and the place has a real high-quality gloss to it, gilt ceilings and all. The random (and dare I say kind of ugly) art work motifs are repeated on the charger plates at the table. Speaking of the table – faux snakeskin? Probably less noticeable by candlelight. I hoped.

This being a celebration, I decided that a glass of champers would be a nice start to proceedings. The Champagne trolley was wheeled over and charming French sommelier made me a mite nervous as he proudly lifted each bottle out of the iced water like a father lifts a newborn. They all looked drinkable, however I quickly established a ‘one blink for yes, two blinks for no we can’t afford it’ code system. We went for the Pol Roger, and got to work on that and investigating the menu.

Curiosity and égalité dictated that we should share whatever we ordered. Via the route of another friendly and knowledgeable Frenchman, our starters arrived. Ridiculously beautiful, first up on my side of the table was the summer gaspacho with Serrano ham chiffonade, and olive crostini. It arrived in a glass cone, set into a glass globe. It resembled a wedding table centre piece, but thankfully it showed substance as well as style. The soup was a treat of fresh chilled understatement, the cucumber really coming through. I have to say that the ham wasn’t particularly finely sliced, so the strips were a bit too chunky. Regardless, the salty flavours were the perfect contrast to the soup’s lightness.

The flipside starter was a small puff pastry pie of wild hare, served with a plum coulis, and frisée. The hare knew it wanted to kick off with some serious flavours- and to prove that it meant business, turned up on a slate slab. The gamey meat was packed tight into its pastry case, and surprisingly the leaves earned their place, as a good foil to the intense flavours. I would have liked a bit more of the plum, it seemed to be used more as a paint technique, rather than accompaniment.

First main course for myself was a fillet of North Atlantic cod, served with a leek mash and tomato fondue. The fish was simply pan-seared, I would say a little shy on the seasoning, but expertly done. It did look a little out of place though, as it was the only thing on the plate who hadn’t been told that today’s dress code was ‘quenelle‘, and looked a little clunky beside its purposefully shaped plate fellows.

I was second in line for the ballotine of chicken leg, stuffed with girolles, and served with haricots and pomegranate. The meat was a lovely golden parcel, with a gentle taste of earthiness coming through from the mushrooms. The pomegranate and beans sort of made sense in that they brought a nice mellow/sweet relationship to things, but the quantities were too underwhelming to be particularly effective.

We finished with a couple of decent desserts, a brownie with vanilla milk shake, and a Bailey’s parfait which was lovely, but rather drowned by the overgenerous half pint of chocolate soup which was poured into the bowl. Still, it was all part of the service.

Abstract has many fine qualities to be proud of. The staff bring an old world style of service up to date with a more personable touch, and the only tiny niggles I had with the menu would no doubt be irrelevant in the context of the full a la carte menu. Lunch was an absolute steal at £16.95 for three courses, and I’ll definitely get into saving mode so we can return of an evening and check out if things become more , or perhaps less abstract.