Cucina at the G&V Hotel (or for locals, the artist formerly known as Hotel Missoni) is a spot I’ve dined at a few times but oddly hadn’t ever gotten round to reviewing. I spied a good pre-theatre deal via Bookatable Edinburgh and thought it would make for a nifty central location for a catch-up blether with my buddy Louise. As we actually arrived at 7pm and left at 10:30pm, it would seem they’re not too bothered about early service and so perhaps they should re-name it to just a simple table d’hote or whatever the Italian equivalent is! This being a Monday night in a hotel restaurant, things were fairly quiet, but no matter. Service was friendly, formal in places, as befits a resto with a pricey a la carte menu.

The bold print-led decor and sort of modern airport feel aren’t really my cup of tea, Missoni’s design stamp points towards the the bold Milano side of Italy rather than the relaxed sunshine of the South. Having said that it’s smartly turned out with rather nice tableware. The wine list is all Italian and we definitely could have benefited from a bit of guidance on which direction to take with the whites. A Soave Classico seemed like a reliable pick and proved to be fresh and fruity. The quality of the bread merits a mention, in particular the soft foccacia with whole green olives baked into it and dipped in a great olive oil.

From the 4/4/3 menu Louise chose the summer salad and I picked the spaghetti alla carbonara. The salad was a celebration of the innocence of raw, vivid colours from beetroot, mangetout, carrots and the zingy delight of lightly pickled cauliflower. As for the carbonara? This is one of my favourite dishes for its simplicity and this example of bite-y pasta, bags of salty flavour from pork cheek, creaminess from the eggs and a (very) generous sprinkling of Parmesan was perfection. Left-over sauce was scooped up with more of that delicious bread; that plate was wiped clean! 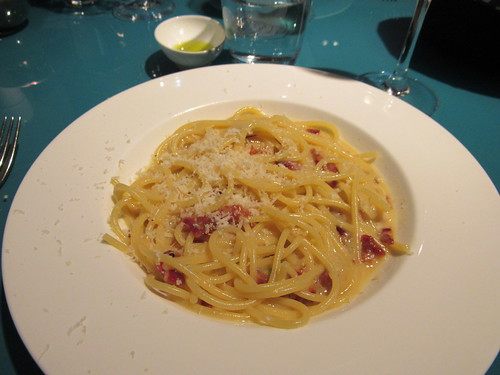 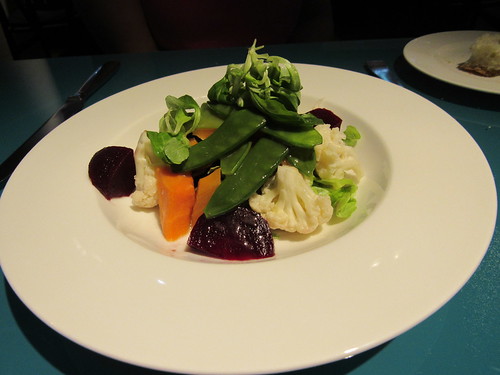 Main courses were both touched with a lightness from lemon, the citrus flavour that really does shout Italy! My thyme and garlic roasted chicken breast had a tasty skin, the meat itself unbelievably tender. Chicken can be a somewhat dull choice, but it was a great summer main course, this was a simple dish, wilted spinach and that lemon butter. A side dish (£4) of minted roasted peppers and tomatoes brought a real Mediterranean feel. Louise’s chunk of coley had been grilled, and the lemon on this dish came forward in crushed new potatoes and a salsa verde dressing. Again, simply put together, perfectly cooked, but very satisfying. 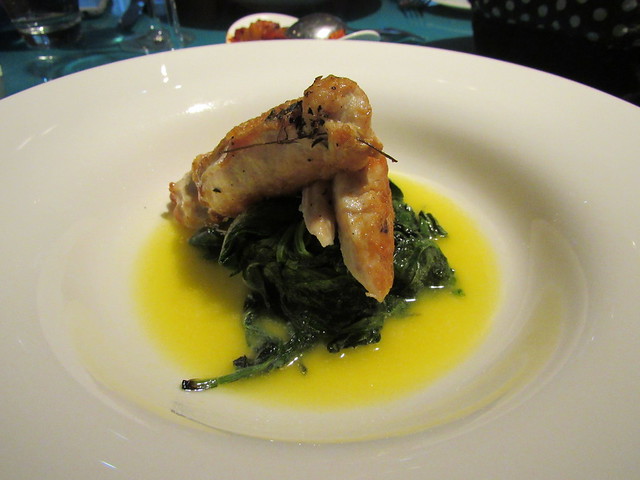 Desserts rounded things off nicley. A pineapple ‘millefoglie’ (Italian for mille feuille) brought confusion in that I had expected pastry somewhere but it turned out to be leaves of pressed pineapple creating the layers, between which was piped a rich milk chocolate pudding type thing. A ‘tuile’ of dehydrated pineapple topped it off. All their ice creams are made in house and I subbed the coconut for an orange sorbet which was super zingy. It was a little odd looking, but tasted great. Louise finished with a selection of first-class ice creams and sorbets. The highlight of the whole dining event was the home-made amaretti biscuits. Worth returning for alone, they were a chewy almond-marzipan delight! At £21 for three courses, it’s great value, showcasing a simple menu where some of Italy’s bold seasonal flavours get a chance to really shine. Well worth a visit.

This star meal deal for Cucina at the G&V Hotel can be found via Bookatable here. 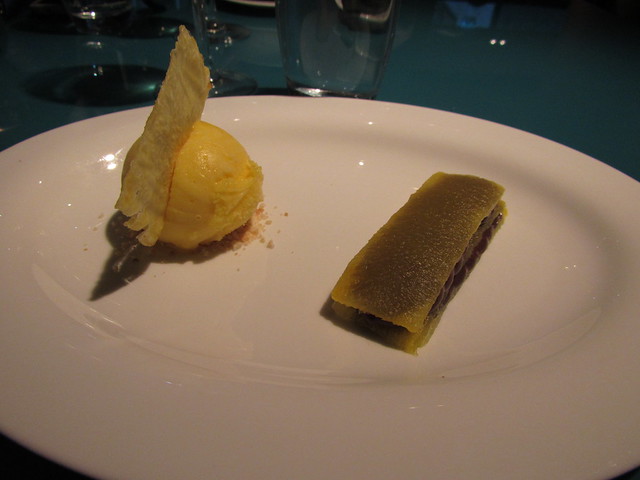