It’s the last Sunday of the Fringe Festival, and I’m on a packed train heading West to Glasgow. A little bit of guilt travels with me as I shun The Capital’s final blow-out on the bank holiday weekend. Also vaguely noteworthy is that these words were originally scribbled by hand, as I’ve yet to fall for the seductions of a new phone which would enable ‘on the move’ blog postings.
As we chug along out of the city, I can see already that the best of the country’s weather is definitely ahead, rather than behind me, and the afternoon of planned al fresco drinks and food are looking like a reality. In the meantime, my senses are being assaulted by the horrendous cocktail of smells emanating from my fellow passengers and their on-the-move picnics. Imagine a blended perfume of cheeseburgers, French fries, pannini, stale cigarettes, small children, and the nylon suit (on a Sunday?)  worn by the tourist in front of me. Nice.
I’m contributing to the honk with my own beverage, a soya latte (Costa not Nero, as I didn’t quite have  enough time) but not to any of the background babble. As I sip at my coffee, there’s at least 4 different languages to be heard, also a table of four German girls chatting in English;their accurate grammar and impressive sentence structuring enough to put many native speakers to shame. Zipping across the central belt, it’s a journey featuring pretty late-summer scenery. Bright clear light, leaves just turning gold, and striped fields with shredded-wheat haystacks lined up. My eyes live for vistas like this, and if my camera could cope with window reflections and a moving train, I would have taken a better photo to share with you!
The main purpose of today’s jaunt is to catch up with some of my friends from the good ol’ days  at Glasgow Uni. We all met in halls in the autumn of 1995 during a time of Blur vs Oasis, cheap food and bottles of Hooch to lubricate bad dancing at The Garage. Some of us stayed in Scotland, some have moved away permanently, others, like Derek, who works in film & TV, spends time away for various projects every year. Currently working on the next season of BBCs Being Human,  he was home for the weekend, so we were looking forward to an afternoon of beer, Bavarian eats and vampire chat.
Out of the station, into a taxi, five minutes later I arrive at Glasgow Green, and head towards the impressive and imposing building that West Brewery is housed in. The Templeton Carpet Factory (who made carpets for the Taj Mahal, no less!)  were based here from 1892 until closing in 2005. West moved in 2006 to start their Bavarian Brewery/Pub business which is growing into one of Scotland’s most successful new brewing empires. To quote their website:
We love beer, it’s that simple. As the only UK
brewery to produce all of our beers in strict
accordance with the German Purity Law, we
take our simple philosophy and combine it
with the world’s finest ingredients, a whole
lot of heart and our brewers’ skill to produce
Beer ‘The Way It Should Be’. 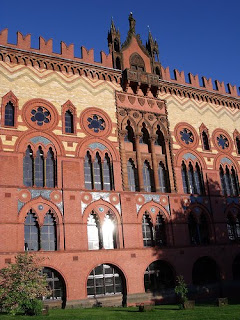 As most people know, I’m more of a wine lady but this was an afternoon for beer, and although West seemed to have a decent selection of wines, it was a case of ‘When in Rome’ so I was up for a pint. Or four  as it turned out! I can’t say I’ll have been permanently ‘turned’, but their St. Mungo’s was a tasty number. The brew recently won gold at a German Beer Competition, which is an impressive feat for a pint brewed in Scotland. A lighter-style lager beer than some of their offerings, it’s a refreshing glass. I’m no expert and can’t really offer brilliant tasting notes, but I’d say it has a little sweetness on the nose and this carries through to a malty bite. Particularly on this sunny afternoon, it was a real thirst-quencher! 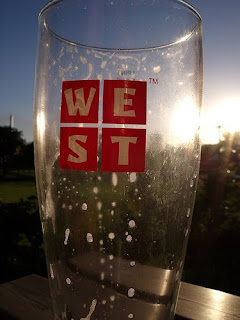 A couple of drinks down, and it was definitely time for something to eat. Food here seems to be as important a part of the operation as the wet stuff, and they have a choice of menus which serve food from 11am to 9/9:30pm at the weekends. I chose from the ‘specials’ menu which features their in-house German specialties. Here you can find smoked sausage salad (wurstsalat), potato salad, schnitzels and more sausage.They also have a good selection of gastropub fare such as burgers, fish and chips and posher-sounding items like lamb rump, and pea and broad bean salad.
I opted for the Jäger Schnitzel (£10.95) which is a non-breaded pork escalope, and served with a frighteningly addictive mushroom and parsley cream sauce. There were at least three different types of tasty mushrooms in there, and the surplus was perfect for dipping the accompanying fries into. I have to say, I am a fan of veal, but this pork version was delicately cooked, thin and just as good as its bovine counterpart. The chips were decent catering chips, nothing super exciting but cooked to a nice level of crunch. My friend Kathy convinced me to share a portion of onion rings (£2) with her. Normally these greasy snacks are something I can do without, but these particular specimens had the lightest batter ever, but most crucially the batter had  a good well-seasoned flavour. So it wasn’t like eating onions cooked in wallpaper paste at all. After a few hours of great drinks, food and company, I came to realise I seriously love this place, and can’t wait to come through again.Maybe next time we won’t be so lucky with the weather, but I can always bring a scarf!
If you do fancy heading down to West to check them out – and if not, why not? – take a second to look at their website first, as there’s sometimes limited opening space and times due to private event hires. More information can be found at http://www.westbeer.com/Opening_hours.html
Prost! 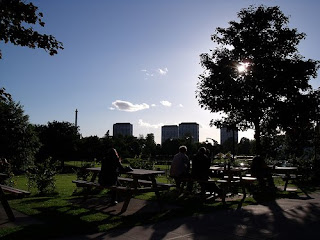