AKA George Square, Blythswood Square, and Royal Exchange Square in one evening…art deco and all.

These Glasgow files start with a Cockney lad, the Prince of all things Pukka, Mr Jamie Oliver. The some-time chef, one-man media empire and it cannot be denied, lover and champion of good food, has opened a unit in Glasgow’s old GPO Building. Slap bang in the city centre, right on George Square fah-goodness sake, he certainly can’t argue that his scouts did a bad job on the location front.
Thus for my colleagues and I, it was nothing short of a belter of a plan that the four of us take a train through to Glasgow one night and take a ‘pop’ in to Jamie’s Italian. Having heard the news that the place had been rather busy since opening and that they won’t take reservations for tables of less than 8, we had the presence of mind to get a ridiculously early 4:30pm train through. Only problem was, this got us to the front door of the restaurant at roughly 5:27pm, and despite the temptation to take a table just because they had one, we thought it a bit early for dinner. 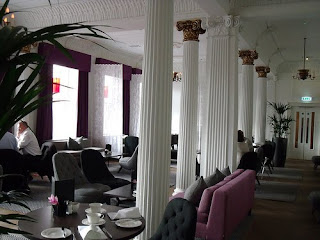 The boss had the genius idea of heading up to Blythswood Square for drinks for an hour, and then we could head back down to Jamie’s and have dinner then. Yes, reader, we were naive, and bolstered by the bottle of Champagne we’d had on the train, a little foolhardy too. We arrived at the terribly elegant Blythswood Square Hotel, situated in the building which was former home of the defunct Royal Scottish Automobile Club. A Georgian terrace, it has also kept plenty of the RSAC’s art deco features, including the stunning black and white marble floor of the entrance hall. It also has some fun new design quirks with tweed fabrics and print detail thanks to Graven Images’ involvement in the project.
Despite the bar’s fame for their killer cocktails thanks to head bartender Mal’s creative concoctions (yes, try saying that one after a few), we stuck with the G&Ts on this occasion which was a good idea to keep us sharp. Still had that table at Jamie’s to fight for later. We took a booth table at the window, in the main bar and dining room, which is situated in the old ballroom. The room was dazzlingly bright thanks to the huge windows, and has a lovely aspect across to the square’s private gardens. It was an exceptionally civilised way to spend an hour, and we also made time to have a peek at the upstairs salon where they serve afternoon teas by day, and drinks in the evening.  Object of much gorgeousness award goes to the chandelier in the main stairway. Stunning! 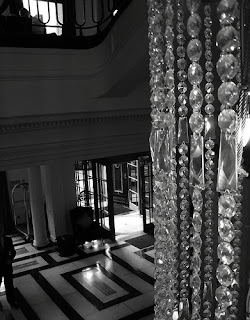 It had been so nice in there, that it was with a slight sense of ‘aw….do we have to?’, that we meandered back down to Jamie’s Italian. At the point of rounding the corner in to George Square, we could see that the queue was running to the end of the block and knew then and there that the game was a bogey. We flirted with the idea of waiting, but the cheery staff assured us it would have been no less than a 45 minute wait outside, prior to the 45 minute wait inside. He worked his magic along the length of the line, doling out his warning to those in a hurry , whilst offering pieces of salami and cheese by way of consolation. Glasgow’s tales of ‘how long I waited for a bowl of pasta’ will no doubt continue long in to legend.
A plan B was needed sharp-ish  if we were to have time to eat and then catch the train home. I piped up Rogano only because  as a student in Glasgow in the mid to late 90s , Rogano pretty much epitomised everything stylish, luxe and gourmet that I clearly was not. It was close by, and we wandered in under the iconic sign and frankly, I finally felt like I had ‘arrived ‘. Rogano’s art deco interior has survived 75 years with little more than a change of carpet from time to time. Launched in 1935, and fashioned in the style of Cunard’s clyde-built Queen Mary, for those with an enhanced sense of nostalgia, this restaurant is close to heaven. In fact, if ever a movie scene comes to mind for this place, it is Fred Astaire in RKO’s Top Hat (same year!) spinning the fluffy-feather dressed Ginger Rogers around to Cheek to Cheek. Heaven indeed! 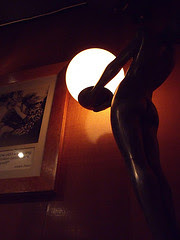 We decided that the upstairs a la carte dining room was a little over the top budget-wise for the evening. My credit card was heard sighing relief, and despite a twinge of disappointment that we weren’t dining in the ‘posh bit’ , we went below decks to Cafe Rogano and were shown to a table in the back dining nook. Great little space with panelling and deco features, there was the definite feeling that we could have been sailing over the Atlantic, and would be arriving in Manhattan in time for brunch at the Waldorf-Astoria.
The menu is very reasonably priced, so much so that I was kicking myself for never having been before. Our vegetarian dining companion was beyond impressed at having been offered a separate vegetarian menu which featured four excellent starter and main courses. Between us we had a vegetarian haggis gateau, really good mussels with Thai spices in coconut milk, smoked haddock and the chicken liver parfait which was my pick. I really need to get out of the habit of always ordering parfait, pâtés and terrines to start with….
But not yet, and this parfait was excellently smooth, just the right amount of garlic to know you’ve had it but not so much that you’re worried about chatting to tablemates. The service was classy, attentive but slow in a good way, and by the time the second courses were on their way, I knew that the night at Jamie’s would never have been quite so relaxed. My main was a sophisticated incarnation of fish and chips, but not so much that the mushy peas were left behind. A criss-cross tower of perfectly cuboid potato logs, I think twice cooked, and fabulous. The pavé of cod was a monster, and unsurprisingly in a restaurant famed for seafood and fish, and the clean white fish was lightly cooked to soft perfection. Every restaurant promises crisp batter for their fish and chips, and I have to say this is one of the only places that hasn’t disappointed yet. Instead of the 30second window you usually have to enjoy the crisp batter before it goes soggy, this one genuinely stayed crispy until the last mouthful. The peas were sweet and a reassuringly ‘normal’ shade of green. 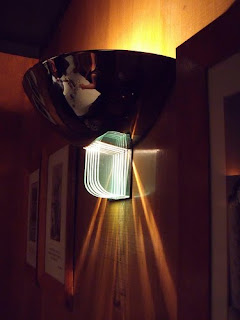 Dining companions raved about the confit duck which was a serious contender for what to order next time, and also the seafood linguine and the wild mushroom risotto. Dinner was helped along with a couple of well-priced bottles of Rothschild Viognier. Just a couple of espressos to finish and the bill was a fairly puny £100-or so including the tip, so really good value for the four of us.
Leaving this restaurant that in design terms, epitomises such a glamorous era, we made a mad dash back to the jarring 1960s frontage of Queen Street Station to catch the 11pm train back to Edinburgh. A good night in Glasgow, and little did I know I’d be back through within the month for another bash at Blythswood Square and take two of tea at Jamie’s!
Glasgow Files Part Two…next!