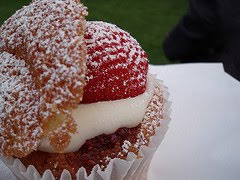 Taste of Edinburgh arrived once more a couple of weekends ago, bringing with it an event filled to the gunnels with all things food ‘n’ drink. After the amazing time we’d had last year, I was eager and hungry for 2010’s event. Even better, this time round I’d been invited as a guest of AEG Electrolux to check out their 21st century induction hobs with Nick Nairn’s Cook School, not to mention being treated to some rather lovely hospitality. Thanks to Julie and her team for looking after us so well!
Friday Session
After registering with our hosts at the totally snazzy Cooking Classes tent, and signing a ‘we are not allergic to x,y,or z’ form, we were taken over to Rachel Allen’s first cooking demo of the day. In little over 25 minutes, she’d knocked up a sexy Thai-style crab and prawn soup, and also a baked raspberry cheesecake. Nice work, chick. Picked up a really cool tip on de-seeding chillis, and also to use a metal bowl to sort through crab meat, cause you’ll hear the chink of shell if any remains. We didn’t get to taste, but the coconut-y smells that wafted our way were saliva-gland squirtingly good. 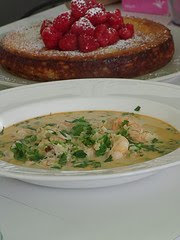 Next up was lunch! Champagne corks popped, and in no particular order, I started with The Rutland’s slow-cooked lamb shoulder, which was beautifully seasoned and tender. The potato salad that came with it could have done with a bit  more pep though. Next, having seen a tablemate bring one over, I went for Cucina Missoni’s seasonal and fresh ricotta ravioli with asparagus. An impressively elegant dish, given it’s being served at a food festival. I still haven’t managed to get in to their restaurant, and know I have to give it a go. Lastly, the rumour-mill and first hand tipping (thanks to Jonathan at 5pm Blog) were starting to gain momentum that this year’s charity restaurant stand for Action Against Hunger, and run by London’s swank Launceston Place, was the one to beat. Roast beef fillet with black truffles, watercress and potatoes. Swoon! My beef was meltingly rare, and the truffle factor was enough to issue the gold medal without further ado. 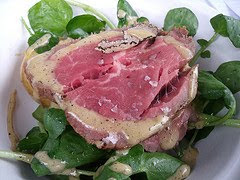 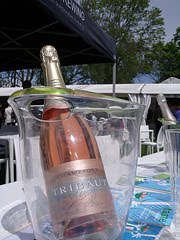 After a wander around, meeting the lovely chaps at Firefly Tonics as I went, I glanced to the packed Peugeot Theatre, noticing that the swarthy Jean Christophe-Novelli was doing his thing. I did wonder what brand of mascara he was wearing, but doubt that was the first thing on the assembled ladies’ minds. I’m sure they were engrossed in his, um, cooking technique.
Next up was our chance to get into the kitchen, stand the heat , and eat the eats. Nick Nairn was our affable chef patron for the session, and we got to grips with the AEG induction hobs, which do clever things with ceramic surfaces and magnetising the pans you use to minimise the amount of energy used, and also means you’ve got a super-safe surface which doesn’t hold any heat. The recipe we tried out was high-heat grilled asparagus, and low low heat poaching of eggs. The controls were a dawdle once you got used to it, and somewhat quieted the gas-champion in me. It was pleasingly simple dish, Chef Nairn rightly recommended using the freshest free range eggs ALWAYS, and a sprinkle of Parmigiano- Reggiano upped the tasty ante. 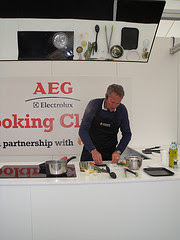 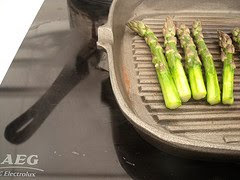 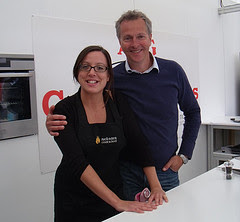 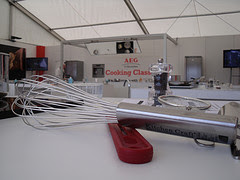 The odd rain shower wasn’t enough to cut things short (plus, I was wearing my swanky new wellies) and so the rest of the afternoon’s session was spent taking in some of the suppliers’ stalls. Last stop was the Lucklaw Free Range Pork stand, local-ish folk from Balmullo in Fife. I couldn’t not buy some of their sausages for a future BBQ date! 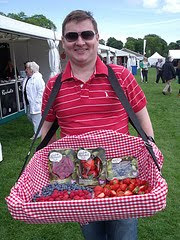 Saturday Evening Session
Thanks to my press pass, and a surplus of Crowns to spend, I headed back to Taste for the Saturday evening session, and found the party was gearing up to be in full jazzy swing, soundtrack provided by the Jam House’s live band. It’s the first time I’d been in for a late session, and the atmosphere is a bit more ‘grown up’ – I think the focus is decidedly 50/50 food and drink. The Twitter tweets had been pouring in over 24 hours, and by recommendation, my first tasting stop was for Amber’s Choux Bun with wild mushrooms, and a cheese fondue. It was soft and rich, and an ‘all over’ experience as I managed to dribble some of the sauce down my tshirt. Nice. 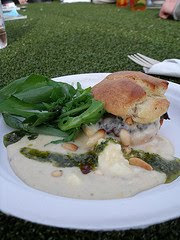 Did someone say asparagus? This is a food festival in May after all, and Phantassie Farm had a lovely display with asparagus and rhubarb and lots of other 5 a day friendly delights. 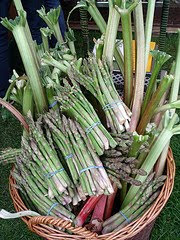 The VIP tent was as, um, functional as it always seems to be. This year, run by Missoni, it was a stripe-tastic bar, basically. Unless it’s totally chucking it down outside, I’ve never quite understood the appeal of hiding away in there and basically missing all the delicious things happening outside. 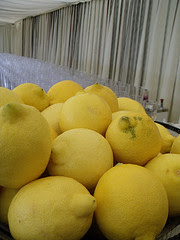 Least exciting of the weekend’s tasting dishes was the veal, mozzarella and tomato thing from the Waitrose Kitchen. It looked nice enough, but the veal could have done with a dash more lemon to season meat. The cheese was squishy lovely though. 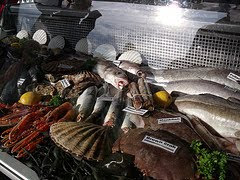 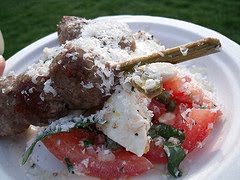 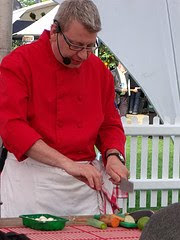 Matt Powell, from Edinburgh’s Hotel du Vin did a demo in the Peugeot theatre which was a bit of a masterclass in cool. Starting with coquille St. Jacques , presented on a lovely scallop shell, he then did a demo of a Scottish cheese souffle with cheese sauce. It worked like a dream, and inspired I’ve actually spent the last 2 weeks in my own kitchen on a bit of a revival kick, trying out recipes with egg whites, and making meringues again. Thanks chef! 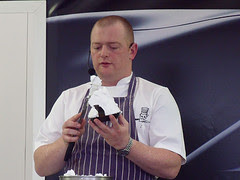 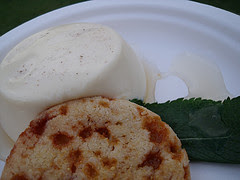 More to eat? Well, just! My dessert was from The Scottish Cafe, a very good lavender panacotta, which came with a mega sweet, melting honeycomb cookie. The mint leaf garnish actually earned its place, as was a nice palate cleanser to finish. To finish, I say. Nearly, but not quite, I also swung by Cento Tre just before leaving to pick up a strawberry cupcake to take home for the Silver Fox who hadn’t been able to make it along. Here’s to next year!

More photos from the weekend can be found on my flickr set here. 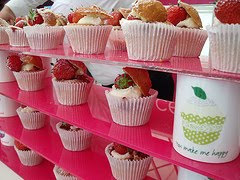