The Scotch Whisky Experience near the top of The Royal Mile is without doubt, one of the city’s ‘must do’ visitor attractions. If you’ve ever had the pleasure of doing a tour with visitors from out of town, you’ll know that albeit at times elements of the tour are a little corny, the welcome from the team and sharing of information on Scotland’s ‘water of life’ is always genuine. Amber, is therefore an apt name for the restaurant which sits under the main visitor centre. There’s a spectacularly well-stocked bar, and the dining room itself is a sizeable space, big enough for groups and busy daytime lunches, yet with its warm decor it works just as well as an evening space. Nice touches with barrel staves, custom blinds and of course candle light make for a pleasing night-time atmosphere. 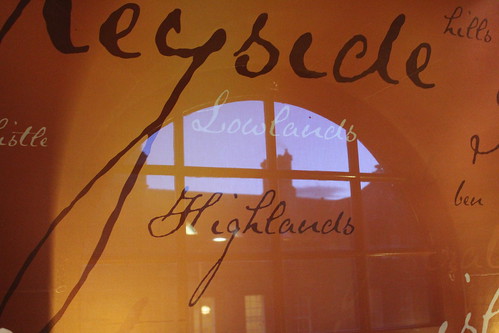 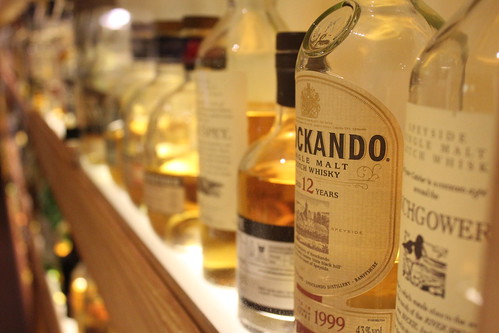 I admit that as a local, this isn’t the part of town I’m most likely to ‘pass by’ on a night out if looking for a place to eat, but after our experience at a recent meal, I’d say it’s well worth the trek. Walk up Ramsay Gardens and you’ve WELL earned a good feed, I’d say! Mum had a 9pm train to catch back to Dunbar, so things were pretty quiet when we arrived at 6pm, however the place filled up nicely over the course of the next few hours and there was a great buzz when we were leaving.

We started with the classic ‘what to order’ dilemma, as the menu has a fair few ‘star’ dishes to choose from. A strange absence of any seasonal game would be the only query, but certainly didn’t leave us lacking in options. Mum choose the Shetland mussels cooked with cider and Arran mustard. I chose a trio of the ‘Scottish Tapas’ which are also available in the bar. Looking back, I realise I must have been in a carnivorous mood as I had haggis, neeps and tatties, a game terrine and a ham hough and chicken terrine. A little tian of haggis hit the spot (Macsween, of course!) and despite having chosen two terrines, they were both distinctly different. The ham & chicken one had a good whack of salt and smokiness, the other was a really fruity number with apricots, cherries (I think) and pistachios. A little toast point would have been a nice touch, but I pinched some of mum’s bread so all was good. A note too for the garnish on these dishes, a slice of flavourful tomato,a sprinkling of tasty little microherbs, nicely done. Mum and her bivalves got on famously, honestly they’re not my thing, but her feedback was pretty conclusive, in the resulting bowl of empty shells. 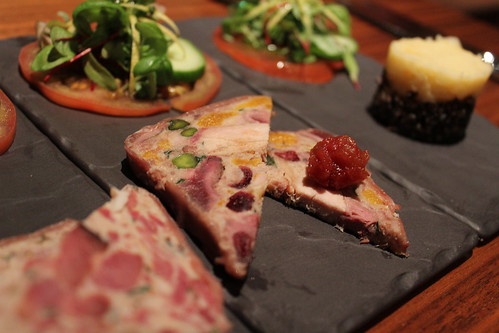 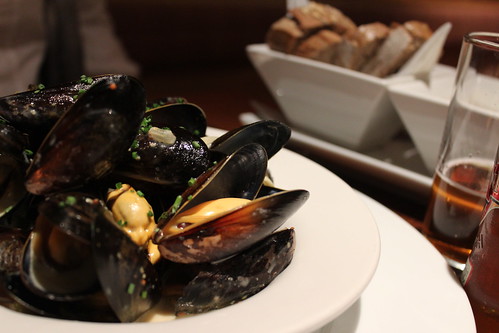 Make no mistake, the whisky list is exceptional. We’re talking around 300 amber beauties to choose from, so don’t be shy in asking for some guidance on that one. The host chatted through our menu choices,  a little bit about what we like in general and came up with two cracking pairings for our main courses. Mum had the ‘game on!’ challenge of a particularly big Ardbeg blend, the Uigeadal. A big bold Islay, this was a smokey number matured in sherry casks, and with notes of iodine and tcp. In short, a belter which took no prisoners! With the grilled meat, it worked absolutely, bringing out sweeter notes of the steak.

My whisky was a pussycat in comparison, the Glendronach 18, matured in Olorosso casks which gave such an incredible nose. Seriously , I was still sniffing the remnant sweetness on the glass long after the dram was finished. This was more overtly sweet, with lovely toffee, and raisins and a little spice. It was heavenly with the lamb, especially with that rich jus. 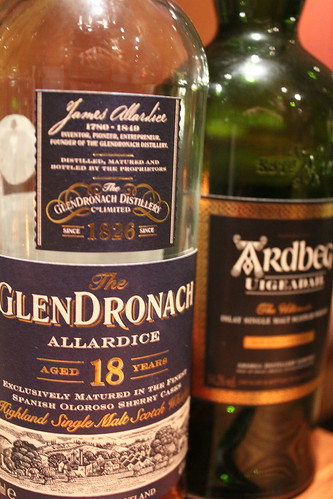 My meaty meal continued with (as requested) very tender pink lamb rump, served in satisfyingly chunky slices on top of a round of outstandingly tasty crushed minted tatties. Unashamedly old-school, I love that combination, and a great landing for the lamb. The jus this was served amongst definitely gets the award of the night for me. A perfectly rich meaty stock, dotted with broad beans, sweet baby onions, bacon and the tiniest little dices of carrot. Finesse and substance at the same time.

Mum’s Tweed Valley sirloin steak maybe wasn’t quite as pretty (an odd choice of dumping the chestnut mushrooms and wilted spinach on top of the meat) but as with all their ingredients, a well-sourced piece of boeuf, again cooked to point as requested. Mum went a little rhapsodic about the roast potatoes, so we weren’t surprised to find out they were Bartlet roosters, when we read the list of food suppliers the restaurant works with. 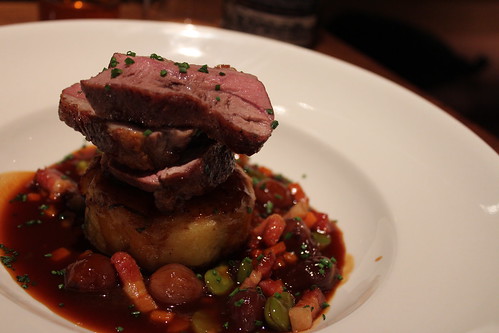 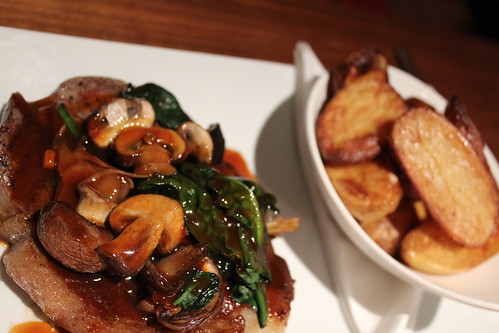 Desserts were perhaps where Amber could improve a little. Mum’s chocolate and salted caramel tart was truly excellent, with a  distinct layer of the toffee underneath the chocolate. The garnishes (all four of them!) were a little over the top though. They could have easily ditched the out of season strawberries and silly chocolate curls, a little dollop of cream and a physalis fruit would have been plenty.  My ‘Autumnal’ cranachan shortcake with preserved raspberries really missed the mark though. The berries tasted more like they’d been fermented, they were so unbelievably sour, and a distinct lack of any defining ‘cranachan’ flavours of whisky or honey in the cream. And again, more out of season strawbs to garnish. The shortbread was good though, so just a shame its plate mates let it down. Perhaps a blackberry and apple version would have made more sense at this time of year. 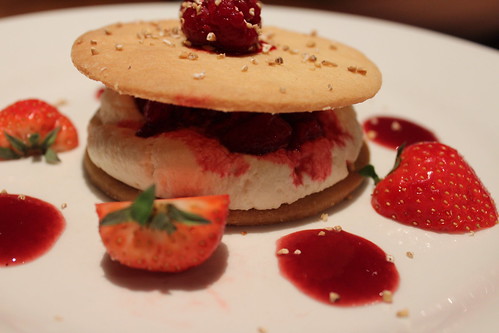 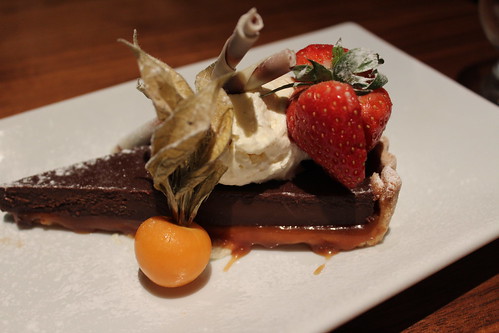 In all Amber really is highly recommended, the desserts thing being an anomaly I reckon, rather than standard form. Well worth a visit, especially if you like your meat! They also have a series of special menus which run through the year, including set dinner menus over crimbo (I imagine this place would be really cosy and great fun in December, a good meal and a few wee tipples in the bar at the end of the night) and of course that Macsween haggis really gets its chance to shine in January for Burns Night. 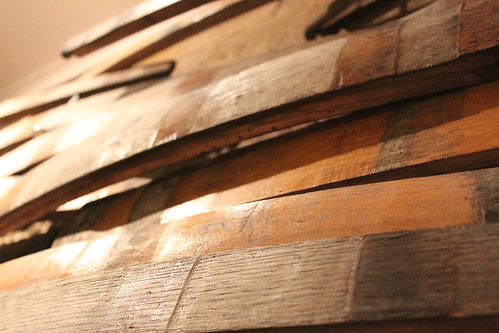